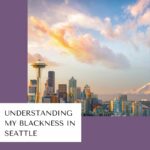 In this clip, listen as a Black woman shares how growing up she has come to understand her Blackness in Seattle. She describes that her childhood was very non-traditional, layered, and made up of several components. This, she says, gave her not choice but to understand her Blackness. Additionally, in Seattle, given the lower population of Black people and the higher population of non-Black people she was forced to understand Blackness in that setting. It was only until she experienced Blackness in Atlanta or St. Louis that she recognizes how much non-Blackness she has experienced in her life.

It’s different. Our numbers are different. The percentage of African American people is low in the Seattle metropolitan era…that’s the nature of Seattle and has been.